So, it’s been a few seconds since we hit you with some Crap Graf. Has there been a dearth of such doodles in Bojo’s Giuliani-esque London? Have we been royally fucked off that some chancers decided to launch crapgraf.com and pass it off as their own idea (oh yes, and fuck you to that T-shirt shambles fatlace.com as well – since 1999? Since 1997 bitches!) or have we just been a bit lazy? A mix of all three, if truth be told, not least a little bit of self-loathing that URL’s we once owned are now biting us in the arse.

Still, have they got this? 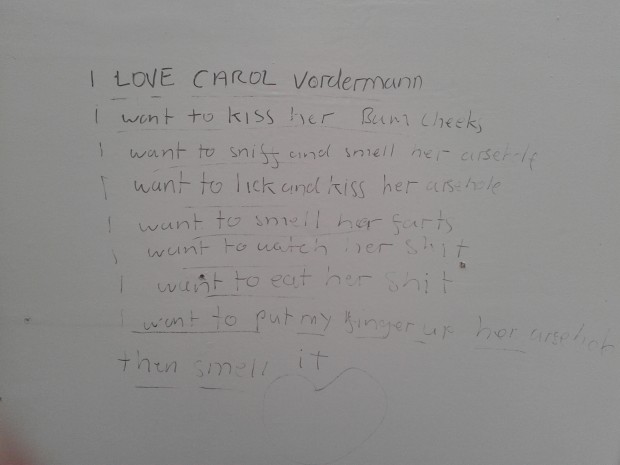 No, they fucking haven’t.

You can’t go wrong with graf about the woman some of the FL crew call Carol Vaudeville Villain and others call Carol Vordul Mega, depending where they are on the autistic spectrum that is knowing about indie rap artists of the recent past. Either way, Vorderman Durch Technik will obviously be flattered to be the subject of scatology combined with her surname being misspelt. Vorderman has replaced Joan Bakewell as the thinking man’s crumpet mainly because she used to stand near numbers (we’ve all stood near racks of unsold Organized Konfusion 12″s, but no-one invited us to Dictionary Corner), winning Step to the Rear of the Year and publishing her bestselling autobiography ‘I Deal in Mathematics’ (ghostwritten by Ghostwrite Killah). She’s now moved away from ‘Countdown’ to be replaced by someone whose labia majora is actually north of her knees, and is now better known for appearing on the animated HRT patch that is ‘Loose Women’. And if she’s that loose, she might want to take the anonymous auteur of this masterpiece up on his offer. Although homeboy is putting the cart before the horse by eating her shit before putting his finger up her bum and smelling it. Do that the other way round – haven’t you heard of foreplay? And don’t forget to cut us in – the eBay value of Vorderman’s dog eggs is on some whole ‘nother Fabergé index…

PS. We leave you to draw your own poetic conclusions about the fact that this piece of doggerel about Vorderman’s rectum was found right next to a pub in London Bridge called ‘The Three Grapes’. All we’re saying is that one of our mums attended a filming of ‘Loose Women’ and Vorderman carried a cushion around at all times, leading us to conclude that she’s got a chronic case of the ‘Demo tapes bi-da miles’.