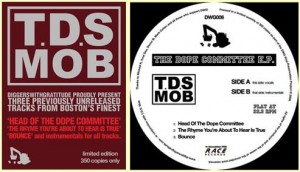 Most of the Fat Lace crew have long hankered after being members of any committee that’ll have us. Thus far, we’ve only attained membership of the Itty Bitty Titty Committee, and Dan’s Large position on that is looking shaky due to his swelling moobs. But imagine how good it would be to not only be on a committee called ‘The Dope Committee’, but also be ‘Head of the Dope Committee’. That’s some quango the B-Boy outlaw isht right there. On to the subject matter: ‘Head of the Dope Committee’ is the name of an EP of killer unreleased music by Boston’s TDS Mob, the people who kindly gave us ‘Dope for the Folks’ and ‘TDS Scratch Reaction’ back when Mrs McLuskey was in charge of Grange Hill. These unreleased gems were recorded in the same sessions, all killer, no filler. The fun doesn’t stop there – the relentless archivists at DWG have also repressed TDS’ previously released but pretty hard to track down gems as the accompanying ‘Boston Classics’ EP, and to further gild the lily, they’ve also put all the cuts on a CD/DVD double pack, with TDS Mob videos and live performances you will never, ever have seen. We’ve previewed the stuff – it’s crazy. Check out some snippets of the pureness below, and you can order yourself whichever bits you want, or the whole damn bundle, right HERE. You’ll also be cosy in the knowledge that TDS Mob themselves are seeing paper for this product. It’s win/win/win.

There are no responses so far.