Lord Shafiyq – My Mike Is On Fire Acetate only remix 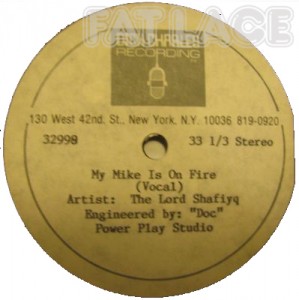 The original ‘My Mic is on Fire’ dropped in 1987 on Nuwr Records. Despite a reissue, it remains a sought-after piece of vinyl, while even more collectible is the ‘Kool Kat / Rhymes on My Mind’ 12″ on the same label. They’re both dope records, but to my mind there’s better stuff on the ‘Chosen Ones’ LP. But what to make of this curio that cropped up on eBay this last week and sold to the tune of nearly $900? The seller tagged this acetate as coming from 1990, an unreleased remix / re-edit lost in the vaults ever since.  Whatever the truth, it’s another piece in the vast universal hip-hop jigsaw, one destined never to be completed. Until we get that unreleased Froggy Frog acetate, anyhoo.