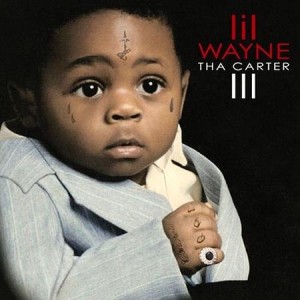 Look, it’s great that any rapper can sell 1.5 million in this internet ravaged climate, and we all secretly love how the helium voiced pygmy with braids from Cash Money has transformed himself into the heir apparent to Andre 3000’s throne, brushing aside rumors of ghostwriting and being bummed by Baby along the way, if only to stop Nas making more convoluted concept albums on the state of da kulcha, but this just isn’t a very good album when you get down to the nitty gritty.

Easily the least effective installment of the The Carter trilogy of albums, for a rapper bursting with so much personality – no mean feat when you consider he’s a barely comatose syrup sucking mong most of the time – this album is so formulaic it literally could be the newest release by any of the 4 or 5 rappers who can still just about crawl to platinum status and that just isn’t good enough for the rapper who transfixed us with his digestive system obsessed raps about how ‘Gremlins’ was his favourite movie as an alien child and who was on fire (no Hot Boys) from 2004 – 2007.

Crucially, it lacks that N.O funk we’re accustomed to. Kanye-helmed tracks like ‘Let The Beat Build’ are fine with us, but shouldn’t the backbone of a Lil’ Wayne album sound a teensy bit, well, southern? And does a rapper whose voice has been sampled to startling effect on hooks by everyone from Dipset to Trae and who Biz/ODB-ed it up himself on hooks for other people on tracks like ‘Duffel Bag Boy’ and ‘Hello Brooklyn 2.0’ really need tacky phoned in hooks from Babyface, T-Pain, Robin Thicke and Bobby Valentino? Shouldn’t Weezy be setting the trends instead of following already tired traditions? And where’s Birdman, All $tar, promising Young Money up and comers like Mack Maine and the Cash Money in-house producers?

This’ll be our last word on this one. We’re not complete curmudgeons, so we’ll admit ‘A Milli’ is some classic shit and we can’t hate the triumphant irony of a Lil’ Wayne and Swizz Beats collaboration being a conceptual track about the art of mceeing over a David Axelrod sample, but we’ve nearly forgotten this album already and, really, Dwayne just be yourself next time around, okay?

BG – Chopper City In The Ghetto

Back then it was all about Juve and right now the world belongs to Weezy, but B.Gizzle’s 1999 set is, undoubtedly, the finest album from the Cash Money roster and the album which best demonstrates the Cash Money Records raison d’être: a variety of weird, high-pitched snarled or lisped voices which make Pimp C sound like Billy Danze, ostentatiously ig’nant bragging, garish nouveau-riche Pen & Pixel covers, the sort of back and forth interplay between rappers on posse tracks which could only exist between friends who’ve grown up together (and which, sadly, no longer exists in the modern age where posse tracks are recorded via verses sent by UPS or email) and the all important crisp ricocheting electro-funk of Mannie Fresh.

Juvenile’s ‘400 Degreez’ is often trumpeted as being the defining vintage Cash Money Records opus, but it’s a slightly flabby affair which often leads you to scramble for the fast foward button, whereas ‘Chopper City In The Ghetto’, while weighing in at 16 tracks, feels surprisingly lean as it bumps from the opener ‘Trigga Play’ to the lush ‘Cash Money Roll’ to the closing melancholy double-punch of ‘Uptown My Home’ and ‘Bout My Paper’. You’ll no doubt know the two hits, ‘Cash Money Is An Army’ and ‘Bling Bling’, which are two of the finest singles of the late 90’s, but beyond them it’s a non-stop slew of pinging-and-zinging production from the auteur/bounce overload Mannie Fresh with that bizarre array of voices darting in and out of each other over the top on the likes of ‘Dog Ass’, ‘Knock Out’ and ‘Niggaz In Trouble’.

While B.G lacks the commanding rasp of Juvenile or the high pitched hyperactive bounce of Wayne, his odd nasal lispy tone has a cold world weariness to it and it’s when the pizzazz of Cash Money Records American dream starts to crack, revealing the struggle of growing up in the N.O as a child rapper prodigy of the Williams Brothers’ heinous empire and the hints of the drug addictions which would break up the crew within a year or so, that B.G displays some depth by getting his Brad Jordan on with solo tracks like ‘Real Niggaz’, ‘Thug’n’ and ‘Hard Times’, making sure he’s the star of his own show and which are the highlights of a neglected southern classic which deserves to be jocked as hard as, say, ‘Ridin’ Dirty’ by UGK.

Not bad for an album by an 18 year old smackhead and his crew of drug addled buddies, then. Proof that we should have ignored Zammo and the cast of ‘Grange Hill’ when they urged us to ‘Just Say No’ and that Ice Cube was right all along when he stated “We don’t say no, we’re too busy saying YEEEAAAAHHHHH”.