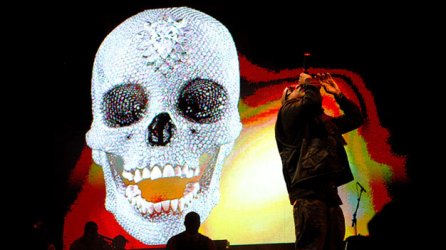 So after all the media furore surrounding Jay headlining Glastonbury, it’s a wrap. Jay Z came, saw and conquered the festival. After the Oasis front man publicly slated him and Glasto for having Jay headline, S Dot Carter gave the middle finger to Noel Gallagher by starting his show with a cover of the Oasis hit ‘Wonderwall’. Jay even came out playing a guitar, albeit unconvincingly. The genius part was that he jacked their hit to such good effect it meant that whether you were a Jay Z fan or a hater, he started his set with the entire crowd singing the words along with him. He then cleverly told the capacity crowd “I got one thing to say”, moving swiftly into “I got 99 problems but a bitch ain’t one”. The bitches were truly silenced. 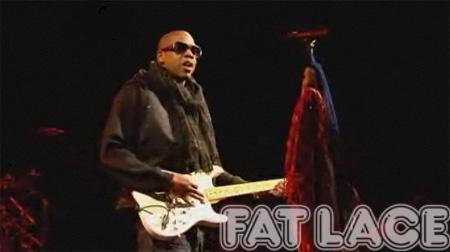 Jay rolled through hits like “Izzo”, “Big Pimpin” and “Hard Knock Life” which were all well received. If it were solely a Jay Z concert joints like “Jigga What, Jigga Who” or his “A Billi” freestyle would have understandably got a much better reception but the crowd weren’t as familiar with his more ‘specialist’ tracks. Even when it seemed some tracks lacked the desired reaction his call and response and a cappella freestyles kept the crowd on side. Regardless, with the exception of a live band who backed him throughout and some support from Memphis Bleek, Jay’s biggest surprise was the omission of any guest artists appearing on stage with him despite the speculation. At any moment you felt he could bring on Beyonce, Bono or Chris Martin but no, he convincingly held the entire set down off his own steam crushing his haters in the process. He made some concessions, the whole show incorporated rock elements, a move which was more than likely prompted by the nature of the event and his doubters. He never usually blends AC/DC’s “Back In Black” into “99 Problems” at shows and the Linkin Park version of his finale “Encore” demonstrated some much needed versatility to his critics, as if it were needed.

If Jay was going to call any show his last, this could have been it, you were witnessing a man at the very top of his game and truly stadium status. Of course it was never going to top classic Glasto performances by the likes of Radiohead or The White Stripes but who else could bring rap music to one of the world’s biggest live music events on the headline stage but Jay Z? Cue Kanye for 2009 but hip-hop truly arrived at Glastonbury in 2008.