Rick James might have carked it in 2004, but dude is still spandexing in heaven, as this modern classic undeniably proves. James, whose changed the face of hip-hop forever with, er, ‘Loosey’s Rap’, is also known for stealing Arabian Prince’s hair and being a comedy catchphrase. How do we know that this isn’t some street scribe trying to get over with ‘topical’ humour? Well, because the correspondent who sent it to us is dead like Netscape Navigator for one, and for two, we did some research and found out that the only person called Sheila who was ever in Hong Kong, died on 19/11/06. Spooky, eh? Which means this is basically G.O.D’s visiting book, and it’s on a wall in heaven. Hey, it isn’t for us mortals to wonder at his infinite fucking wisdom, okay?

You may wonder why it took Rick so long to sign in? He was in limbo, that’s why. Or purgatory. Whichever one it is all those idiots believe in. That one. 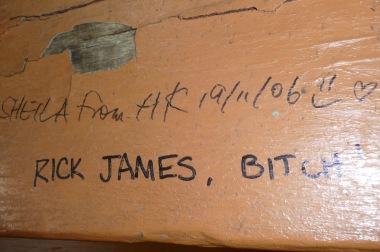