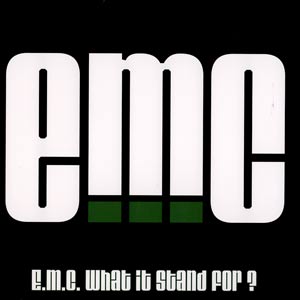 We’ll leave other blogs to debate the irony in an album that contains a tracked called ‘Leak it out’ being leaked a couple of months earlier? Us? It’s late January and we just wanna hear some good hip-hop. EMC is a tricky proposition. There’s no doubting Masta Ace’s legacy or longevity, and Wordsworth proved he was more than just a indie guest shot also-ran with the superb and still underrated ‘Mirror Music’ LP. But where does that leave the other half of the crew – Punch and Strick? Thankfully, Punch punches above his weight throughout. The fine production and subject matter mean that he stops being a glib punchline kid the whole time. And Strick proved on the last couple of Ace solo joints that he can craft a fine verse, and does more of that here, even if the suspicion remains that he’ll never get that real shot at solo stardom.

The structure of the album won’t be to all tastes. Like Ace’s last couple of LP’s, the skits are thematic. Our recommendation is to listen to the LP with them once, then listen to the LP again without them and see if it suffers. Right after that you’ll be deleting those skits and upping the whole thing to your iPod for a clearer, more concise listen. That’s when tracks like the aforementioned ‘Leak It Out’, the Little Brother featuring ‘Traffic’ and nasty drums of ‘Git Some’ first hit you. It takes a couple more listens for the rest to marinate, and then the more thoughtful efforts like ‘Don’t Give Up On Us’ and ‘Feel It’ shuffle into place.

The hip-hop supergroup has always seemed pointless in a music that already packs in plenty of posse cuts, and much-rumoured rhyme alliances (the trio of Saafir, Ras Kass and Xzibit – count us out – the rather fanciful Jeru, Pharoahe, Common and Black Thought one) generally don’t come to pass. At least the four MC’s here display real chemistry, which comes from them all having recorded memorable tunes for Ace’s LP’s. Here, they come out from under the elder statesman’s shadow and hold their end up just fine. As modern day hip-hop groups go, it might not be ’super’ in a unit-moving sense, but these four MC’s add up to the sum of their parts, and you don’t often get to say that about today’s guest-bloated LP’s and ‘remixes’. Strip away the handful of cameos on ‘The Show’, and each quarter of EMC does his bit to contribute towards an LP that deserves to endure beyond winter.

EMC – Leak It Out

7 Responses to "EMC ‘The Show’ review"