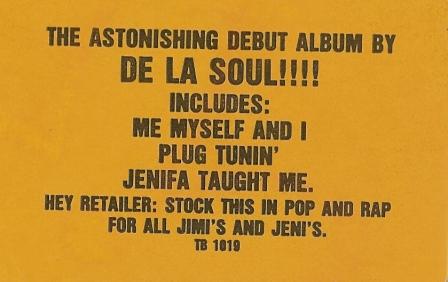 Ok, you earned it, welcome to the new and improved Westwood Wednesdays. Well it’s not really improved, we just changed the name and moved it to another day. On this week’s gig guide we find a Daisy Age Jam at Camberley Football Club. Don’t forget to rock those Africa Pendants, just make sure no Africans see you for fear of them ripping the piss big time. Also make sure your mum doesn’t catch you wearing those shits either, you may be faced with some awkward questions. If you’re actually African, you may as well really go for it and rock two.

Speaking of the Daisy Age, this week’s special guests are Dear La Soul (well, that’s how Tim says it). Not only do they get deep about 3 Feet High & Rising, Prince Paul and break down the meanings behind their names, there’s an exclusive session with Plugs 1, 2 & 3 rapping over the Wildstyle theme.

In this week’s news a Soviet nuclear submarine has sunk off the Norwegian coast and four British merchant seamen are dead, apparently victims of a gas leak on a cargo ship off the coast of Spain. Damn, that’s some crazy nautical drama right there, we hope this doesn’t put you on too much of a downer. If you’re about to slash your wrists and withdraw your application to join the Navy, cheer up, there’s some slammin’ music by Dismasters, Uptown, Ace & Action plus some UK dub plate pressure from MC Buzz B and Black Radical MK II. We just love it when Tim rocks that UK plastic. There’s also a joint by Big Brother’s ex-rhyming partner Jaz.

If that wasn’t enough, here’s some more Daisy Age pressure taken from the inner sleeve of their first album. Remember when we used to get excited about buying vinyl?