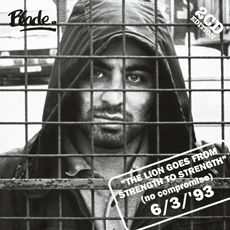 I think we copped our first vinyl copy of Blade’s ‘The Lion Goes From Strength to Strength’ from Dave the Ruf’s shop in Manchester. In a spirited piece of entrepreneurialism he was selling the bonus 12″ some lucky people got with their copy for 50 sheets. We demurred, but still went home with what felt like one of the first proper artistic statements over full length from a UK rapper. While some might argue the relative merits of the Demon Boyz debut, or Hijack’s one stab at glory – and no-one will argue the merits of Three Wize Men, obviously – the strength of this album is that Blade maintains his anger, insight and quality over four sides of vinyl (hip-hop’s first double album, don’t you know) and twenty-something tracks. The undiluted, unfiltered passion of the early 12″s that made his name is still present and correct here. Original Dope, a reissues label masterminded by ex-HHC head honcho Andy Cowan (also overseer of the underworld of cats) has chosen wisely with its first release, Blade’s masterpiece sounding crisper but still fiery on 2 CD’s. Remastered by No Sleep Nigel and with Blade providing liner notes about the record, it’s pretty much essential. Unless you’re some kind of twat, obviously. Cop it HERE

Blade – Gripper The Pitbull (The Approach) 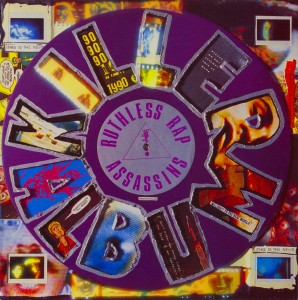 More of a curio is Ruthless Rap Assassins ‘Killer Album’. The Hulme crew are often overlooked in the history of UK rap – the price of being Northern. But this John Peel favourite stands the test of time, especially as its an openly political piece that emerged at the same time as the vapid Madchester scene. Kermit and crew deal with being black in the UK with a light touch – except on the brooding but exceptional ‘Justice (Just Us)’, a track that pulls no punches – and plenty of humour, which stops this feeling like a lecture. We’d forgotten all about ‘And it Wasn’t A Dream’. Refresh your memory with the video below, and keep your eyes on Original Dope’s forthcoming releases. Maybe we can persuade them to put our shitty demos…