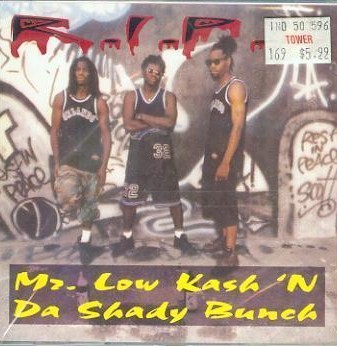 Well, not exactly nothing, but what we do know about this lot can fit on  a pair of Bushwick Bill’s Y-fronts : they have a fantastic name which caused us to pick up the above 12″ when we recently came across a copy, they’re from New Jersey, they have two 12″s from 1995 on a label called Pep Records which also released a 12″ by a group called 2 Hard Ta Handle who apparently included that Mark Curry bloke who featured on ‘Bad Boy For Life’ before getting dumped from the Bad Boy Records roster to make way for Da Band, and an LP from 1996 called ‘Forever Raw’ which isn’t listed on Discogs but which you can buy from iTunes or illegally download from a couple of eastern European MP3 blogs, and Mr Low Kash himself tends to pop up on Youtube whenever someone posts his songs to say thanks for the love.

And that’s all we got on ’em. Most of their stuff, and we’ll apologise to Mr Low Kash now for when he Googles himself and finds this post, is bogstandard midtempo shouty east coast rap which we’ll consign to the Naughty Chair, but the B. side to the ‘R.I.P’ 12″ is right up our alley since it’s a more uptempo banger with some pretty good aggressive rapping and a couple of admittedly well-worn samples which give it the feel of something from an earlier era. The best description we can come up with for this one is it’s what ‘Hot Potato’ by Naughty By Nature and Freddie Foxxx should’ve sounded like.