Raise it up, stop the sag

As anyone who’s seen Style Wars can corroborate, New York politicians have long had a canny knack for coming up with snappily titled campaigns to combat hip hop kulcha in the city, but is post-Giuliani New York now such a safe environment that the biggest problem they face with the urban community the positioning of their trousers? Surely a more pressing concern relating to slung low pants would be the fact that the only women who ever display a bit of builder’s bum in public are the fat ones with hairy, clammy arsecracks that nobody wants to see, no?

All of the Fat Lace crew have been known to get our sag on over the years (Dan Large recently inadvertently came out of retirement when he got a bad case of the seafood-induced trots in Dubai) because we are little more than empty-vessels who’d have copped Medinas from kwik Save (a reference sure to go down well with the international FL readers) if we’d have seen EPMD or Ice Cube wearing some. Eazy E, CMW, DJ Quik, Grand Puba, Mike D, Cypress Hill, and The Pharcyde may have all motivated us to lower our kecks sometime around the early 90s, but the genesis of the sag game in rap actually begins way back in 1986 when DJ Mr. Mixx dropped his Levi’s on the cover of 2 Live Crew’s first album. What, you thought 2 Live Crew’s claims to fame were merely inventing Miami-Bass, introducing the world to such ig’nant talents as Poison Clan and Bustdown, and inspiring drunken white girls to do impressions of the Vietnamese hooker in Full Metal Jacket? Think again : 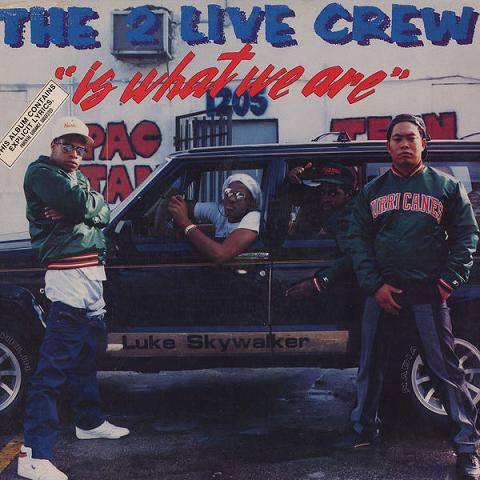 That’s ‘King Tim III’ status right there, son, and a beautiful use of negative space to boot. Cleary not one for merely dipping his 501s in pool of sag, Mr Mixx started as he meaned to finish by practically drowning them. A feat you imagine he probably repeated if he had any post-urination dribble with his trews that low. It’s the wet jeans contest, muthafucker!

2 Live Crew – We Want Some Pussy

2 Responses to "Raise it up, stop the sag"