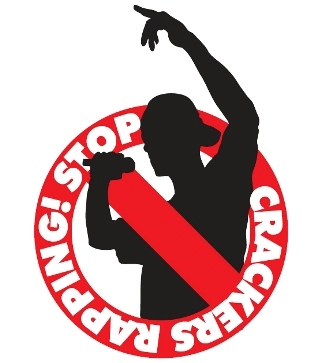 Unlike the rest of the Fat Lace team, who are all dyed-in-the-wool b-boys that grew up ciphering on the corner of 36th and Main, I didn’t come to full rap standom until slightly later in life. I played around with being an indie kid for a long time, mainly because I wanted to wear blazers and fuck second-generation Pakistani girls. But what can I do with that knowledge now, writing for the rap game? Well… usually, when someone tries to school rap blog readers on other genres, its yet another lecture on what hip-hop has taken from elsewhere, where this drum sample came from or what dead funk singer dropped that bassline or da da da. Today, we’re uninterested in that. Today, we are focussing on what other genres have taken from rap. We’re talking about indie cover versions of rap songs, truly proof that God hates you all. As far as we can tell, there are three main reasons that hip-hop tracks get covered by whitey. Allow us to break them down for you.

I’m far too fucking lazy to get my Nate Silver on and provide hard statistics, but I’d estimate that maybe 90% of rap cover versions committed to wax are novelty songs. A novelty song lives or dies by its ability to do one of two things: either birth a dance, or put across some sort of “humour” value. Now, being as Nina Gordon’s take on “Straight Outta Compton” doesn’t appear to hold much thread to DJ Bobo, we can only assume she’s going for the yuks here.

And what’s the wry, sophisticated, Del-Boy-falling-through-the-bar level of hilarity at the centre of all this? A white woman saying “nigger” repeatedly! Man, if I found that funny, I could just go for a night out in Otley. I think Nina Gordon used to be in Hole or something, idk, ask one of those barren single yatches in their late 30s who ignored the clarion call of their biological clock in order to spend more time posting comments under Jezebel articles.

Nina’s not alone, though: the crux of a lot of rap covers is “wouldn’t it be funny if a white person, especially one of bodrick appearance, said some things that rappers normally say?” In this context, the Ben Folds adaptation of “Bitches Ain’t Shit” is an alt.rock version of one of those scenes in crappy family movies where Eugene Levy or an animatronic kangaroo puts on a backwards baseball cap and “busts” some “phat” “rhymes”.

And Folds’ fans have a consensus take on this track: mans is having a pop at “misogyny” in rap. So XxgrayfoxXXX says “Ben folds is definitely making fun of these fucking guy’s who just﻿ use women”, while 0incorporeal notes “Folds is making fun of the misogynistic side of the rap scene”. Which is a little weird, considering Benny’s best known joint is arguably this little ditty, an aggressive bout of woman-loathing that even Tweedy Bird Loc would baulk at. Heck, even Kenneth Erskine would probably find it a little rapey. You can mentally insert your own “that’s racist” gif here.

There’s a long and storied history of musicians “proving” how great the original version of a song is by stripping any life out of it
whatsoever and turning it into an acoustic version. For instance, those of us past the age of 25 can remember the delightful turn-of-the-century trend when it was de rigeur for every shitty shambling singer-songwriter to knock out a bloodless three-chord take on “Baby On More Time”, for instance.

Rap hasn’t been left out of this ill-advised movement, though. Take “My Life” by JJ, who has gotten a little paler and grown breasts since his glory days helming the Nigerian and Bolton Wanderers’ strikeforce.

A generous man would suggest this is an honest attempt at showing the emotion behind the average shitted-out Weezy hook on a Game single everyone has already forgotten about. The pessimist would twig that it’s just some Swedish broad trolling for attention from Pitchfork. She’ll get it, as well.

So if you take a rap track, slow it down, and stare at your audience after each line as if to say “do you see?”, are you proving any point whatsoever? Patron saint of the almost raped, Tori Amos, certainly hopes so.

You’d be hard-pressed to find a track that better encapsulates the problems with these covers. Track back a bit: “My Life” isn’t a great song, but you can kind of see how  “Dear Lord, you done took so many of my people/ I’m just wondering why you haven’t taken my life?/What the fuck am I doing right?” could be a pretty powerful lyric to the right person in the right mindstate? If you draw tortured attention to it, though, engaging in the musical equivalent of underlining it in marker pan and writing “I R SERIOUS SINGER THIS R SERIOUS LYRIC” in the margins, you blow it completely. And the aforementioned Spears pastiches: “My loneliness is killing me/ I must confess, I still believe” is good for a six-second spat out piece of lyrical filler in a bubblegum pop track marketed entirely on a video encouraging people to get into the party van. When you start drawing specific attention to it like that fucking scene in Reality Bites where Ethan Hawke gets his Violent Femmes on, you’re on to a loser. And so with Amos here: if you honestly don’t credit your fanbase with enough intelligence that they could work out that “97 Bonnie and Clyde” is a song about a man killing a woman… then your fanbase are idiots. Don’t pander to them by  tortuously hamming up every single line in Eminem’s original until someone in your audience turns to their friend and goes “Wow, murdering people is wrong… I’d never though of it like that before”.

And somehow… that’s not the worst song we’ll mention in this article.

The Automatic do “Love In This Club” (pretty sure the only lovemaking the Automatic have ever done in a club involves a glory hole). Busted do “Where Is The Love” (this actually sounds like Rancid, except with slightly more intelligent lyrics). Embrace do “How Come” (Bizarre took to comfort eating after hearing this, he used to weigh 7 stone). Enter Shikari do “Day N Nite” (this is a parody, and yet it doesn’t sound that much different than the kind of dubstep dreck FACT magazine readers pop boners for). Both Fall Out Boy and The Gossip separately choosing to do “Love Lockdown” (one of those bands is led by a fat bitch with droopy tits and the other one is led by I can’t be bothered to finish this joke). Rooster do “No Diggity”(because the world needed a Brit School Black Crowes). Lostprophets do “Empire State of Mind” (featuring that guy from LMFAO! This is what your licence fee goes on). Hadouken! do “99 Problems” (for the uninitiated, a sample Hadouken! lyric goes “I may be a white limey/But I like it grimey”). And, just to end it all off, the worst track through this entire 1400 words: Jamie Cullum’s version of “Frontin’”

Jo Whiley is a dreadful human being, that much is apparent: she ruined foot fetishism for everyone in the 90s, and despite being Northampton born and bred, claims London as her manor. But her role over the past decade, foisting these covers onto the unsuspecting public, is John Demjanjuk-levels of crimes against humanity.
Words by Dom Grande

24 Responses to "Cover Me Bad: A Comprehensive History of Crackers Covering Rap Records"