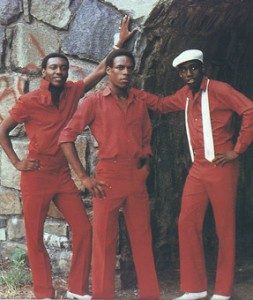 Many old school rappers, when you meet them, are a little bit put out by their failure to get their due rewards for their role in creating a musical genre now worth billions. When you think that Young Jeezy – and no offence to that minor talent – clocked more loot from his debut album than LA Sunshine will have made in his entire rap career, you can see why there’s room to moan. Not that LA does moan, not at all. As one third of the mighty Treacherous Three, who dropped gem after gem on Enjoy and Sugarhill in the early 80′s, he’s seemingly happy about his role in hip-hop history, helping to create a new rap language and dropping more killer singles than most artists manage in 20 years. Along with Special K, Kool Moe Dee and DJ Easy Lee, LA might have got scant reward for his innovation but, when he meets Fat Lace in Harlem, the now coach of Rice High School basketball team is happy to reflect on the birth of his crew…

How did the Treacherous Three form?
The group obviously consisted of me, Kool Moe Dee, Special K and, unbeknown to a lot of people, Spoonie Gee originally. All of us grew up together on the street that’s now famous from Kool Moe Dee’s ‘Wild Wild West’ song, “I used to live downtown, 129th Street, Convent” and that’s where we all grew up at. Quite frankly that is my address as opposed to Moe Dee’s. During that time all the neighbourhoods were sprouting up little DJ crews and what have you, and we formed ours. Prior to us being the Treacherous Three we were part of a crew called the Fantastic Four, which had more than four players. Everybody that was into the DJ’ing thing back then was part of the group. Special K came when Moe Dee went to high school at Norman Thomas, and also met Easy Lee who was our DJ at the time. During that time Spoonie Gee had moved on?

Had he been offered a deal elsewhere?
Yeah, Sounds of New York. I think someone stepped to him and made it accessible for him to be able to make a recording and he just went and did it without us knowing. As a matter of fact, we went to practice one day, came back to practice the next day and Spoonie had a record.

Had you recorded any material together?
No, we hadn’t recorded any material at that time. We were just doing performances. And Spoonie came to practice with a big acetate, it wasn’t even released yet, he said, ‘I want y’all to check this out’ and that was ‘Spoonin’ Rap’ and we heard that before anyone else did. That’s how Spoonie wound up going on his own and we picked up Special K and that’s how the group was formed. Of course, when Spoonie Gee came back into the fold, rather than exiting Special K we were prepared to make it Spoonie Gee and the Treacherous Three being as he had somewhat of a name at the time.

You were still in high school at the time?
Yeah, I was in 9th grade, so I was 15 years old. We started off very, very early.

So, who were your contemporaries in your school and neighbourhood?
Moe Dee’s main influence was Grandmaster Flash and the Furious 5. They were an influence of mine, somewhat but I was most influenced and taken aback by DJ Hollywood. So we fused the two. Moe was more into the beats and rhymes of it, and I was more into the showmanship and DJ’ing of Hollywood because I was just overwhelmed by it when I was introduced to hip-hop by seeing Hollywood at an R ‘n’ B concert at the Apollo. I saw him perform at the intermission of a Whispers concert and he pretty much changed my whole outlook on life. From that point on, I was like, whatever that is, that’s what I want to be doing.

Within the group, did you all have different roles?
Not consciously, but it turned out to be like that because everybody had more of a niche or more of a focal point. I was more into being a performer, being a showman, making sure the performances were tight. Moe Dee was more of a lyricist, a writer. We all wrote our own rhymes, but Moe Dee wrote the majority of the routines that we did. K did some of those things, but also a lot of the singy, chanty routines that we did.

What kind of venues were you playing?
Anything and everything we could get into. It started in the park, as they say, but as we began to get somewhat of a following and performing indoors, there was a place on 125th street called Randy’s Bingo Hall. It was a bingo parlour for senior citizens right above the supermarket on 125th street between 8th and St. Nick. At night, because it was a big wide open space, he’d move the tables, set up a DJ booth and we’d play in there as well as at community centres, high schools and things of that nature. 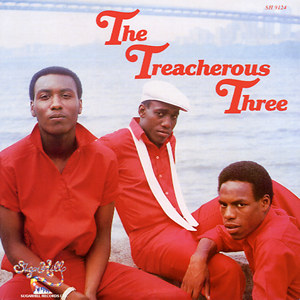 Did you get paid for these shows?
Yeah, if that’s what you want to call it. We got paid minimum. The first gig we had – I’m not gonna say it was a show – was during rap’s conception really, and it was more about the DJ than the MC. You were hired to DJ the party rather than put on a performance for the party. Within our DJ set we would do some beats and rhymes and a coordinated set. We wanted to get paid so bad that the first gig we played, at Randy’s Place, we got paid in pizza. And that was for our DJ’s. We just wanted to get on the mic, say our names a couple of times. That was a level or prestige that other cats weren’t reaching already. To be able to go behind the DJ booth and pick up the mic at will – that was prestige. Cats were looking at you like, ‘Who’s that? Who he?’ We were satisfied with that and if we got pizza at the end of the night, we were good. We had pizza and some Kool-Aid right in the shop uptown. We were totally content.

Treacherous Three – At The Party

And did all that change with the first records when things moved towards the MC’s?
Yes. Actually, a little before that when we realised that the pendulum was swinging towards the MC’s being the focal point. Me and Moe Dee grew up together, from grade school on up we’d always hung out, we were in the trenches a lot more than most of the other cats. We began to feel that we were the focal point and cats were really paying attention to us. I remember going to our DJ – that was DJ Reggie Reg at the time – and giving him pretty much an ultimatum like, ‘If you don’t give us a percent of what we made then we ain’t going on no more’. At that time the flyers didn’t say Treacherous Three, they said Fantastic Four, DJ Reggie Reg, DJ Crazy Eddie, Kool Moe Dee, LA Sunshine, just a bunch of names. But people were coming to see us. When we put the demands on ‘em, unbeknownst to them we were holding our breath, thinking they might cut us off. We didn’t want to get knocked out the loop but we had to take a stand. But they went for it and that’s when we started to look at it as a business, from a stall standpoint.

When did you first get into the studio and start recording?
Man, Moe’s the expert at this. ‘New Rap Language’ came out in 1980, so we may have recorded it late ’79 or early ’80. Something is telling me early ’80.

How did you get the deal for the record in the first place?
Interesting. Spoonie Gee is Bobby Robinson’s nephew and Bobby Robinson owned Enjoy Records. Spoonie did not sign or make a recording with Bobby initially, but he was part of our group. When Spoonie went off to Sounds of New York to make his record, we were left with nothing to do. By that time, Bobby had already recorded Grandmaster Flash and the Furious 5 as well as the Funky Four Plus One. By that time we knew Bobby, we knew he owned a record shop, we just walked around to it and tried to get a deal with Bobby. Then Spoonie came in, which is why we did ‘The New Rap Language’ as all four of us and Spoonie did the other side – that’s how we got the record deal.

Is it true your first payment for that record was in a brown paper bag?
Oh, you’ve done your research. Totally true. And totally disappointing too. I mean, we were children, but children who didn’t have a ‘get paid’ mentality to begin with. We weren’t looking at it as a money making venture, we were looking at it as doing something we loved to do – and we were gonna get paid for it as well. Then they start telling us that we’re gonna get paid, get royalties and X, Y, Z, we start to get dollar signs dancing in our heads. So, our expectactions were extremely high. The record made some noise, locally, it was being played in the hip-hop clubs. ‘Love Rap’, one of the most played hip-hop beats ever, so we knew it was selling, thought we were gonna make some noise. We had no way of gauging the sales but judging from what we’d heard from the record making industry, we guessed it couldn’t be any worse than us getting a couple of thousand dollars apiece. He gave us a brown paper bag and I think we came out with $300 each, something like that. Lot of money for a teenager in 1980, but in hindsight we got taken to the cleaners.

Did you have a contract with Enjoy?
Yep, but who reads a contract? I was 15 years old and I thought I was a man because I was pretty much on my own for the most part. Running the streets, doing my own little hustle – not selling drugs – but doing my hustle to make ends meet. So I was disappointed with the money, but at the same time we were making money through shows.