On a recent trip to New York, Fat Lace decided to find the original spot where the legendary Music Factory record store was located, purely for nostalgic reasons might we add. It had been over fifteen years since your editors Dan Large and Drew Huge had last visited the spot before it closed down in 1992 as part of the Times Square redevelopment. Maybe it was our final goodbye before we resign our vinyl collections as shrines to an arguably more enjoyable way of music consumption.

Music Factory was the spot in New York where the infamous Ultimate Breaks and Beats albums shared equal racking next to the hottest hip-hop 12 inches. There were other famous vinyl outlets such as Downstairs Records but Music Factory was the store more famous amongst New York’s hip-hop community. The role of Stanley Platzer, the store’s resident music guru, has been well documented over the years so we asked a couple of hip-hop luminaries to reminisce on the importance both he and the store played:

“I broke the first Lakim Shabazz record by having it featured on the Music Factory wall. Fat Stanley (Stanley Platzer) was the maven there. An Israeli guy called Mannie was the owner. He was you’re your typical merchant who started selling electrical goods before there was a demand for records. Stanley was the A&R guy. There is an amazing progression of New York street music from mambo of the 40s, RnB in the 50’s, soul and funk in the 70’s and Stanley would traverse it. I’d ask him “Do you have White Christmas by The Ravens” knowing it was unavailable since 1953 but he’d know about it. Music Factory was also responsible for West Coast hip-hop shedding off its old electro sound. In ‘84 there were photos of Stanley with Eazy E. They had come in during the New Music Seminar and shopped there. Stanley hipped those guys to the East Coast sound.” 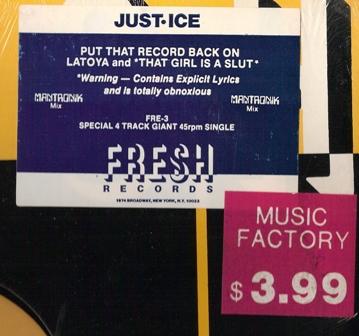 “I worked at Music Factory between ’86 and ’88. Stan worked there too. He did the day shift and knew all hip-hop break beats. I’d work behind the counter but also did bag checking and made sure people weren’t stealing. They would also come to me with hip-hop and break beat questions. I remember serving DJ Red Alert, Chuck Chillout, De La Soul, Keith Sweat, Ultramagnetic MC’s and Biz Markie. He had one of the biggest records we ever had in the store ‘Nobody Beats The Biz’. ‘Holy War’ by Divine Force was also huge. Everybody would come because it was in Times Square, all the radio stations were near by so it was the hot spot for DJ’s and MC’s. They gave me a job with no working papers but I was young and knew my music. I was also a DJ, that’s why I got the job there, so I could get discount.”

Shout outs to all the vinyl specialists keeping this thing alive. If you have a favourite spot past or present, shout them out in the comments section.

Shout out to Mike Lewis for the O.G. Music Factory photo.